As a consequence of the current economic panic this year, many families have been faced with the tough decision, “do we send another member of the home out into the workforce to offset the inevitable shortfall and keep ourselves in the lifestyle to which we have become accustomed?”

Another 10,000 will die in Africa alone by tomorrow morning. Millions will die worldwide this year.

Consequently, food riots have become commonplace in vast sections of Bangladesh and Calcutta. Yet, even the beggars of Calcutta are better off than the estimated 15 million people now starving in West Bengal where peasants patiently wait for dogs and vultures to finish picking at the carcasses of dead cattle. 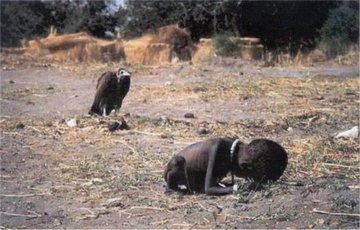 The picture depicts a famine stricken girl being stalked by a drooling vulture.

Weak and faint with hunger, she is crawling towards a United Nations food camp, located a kilometre away. The image strikes us with horror.

That child is somebodies little girl.

No one knows what happened to the little girl, including the photographer who left shortly after the photo was taken.

He later confided in his friends that he wished he had intervened.

“Now by chance a priest was going down that road, and when he saw him he passed by on the other side.”

Three months later, and only weeks after being bestowed with the Pulitzer prize, Kevin Carter committed suicide.In his suicide note he said he was “depressed… without phone… money for rent… money for child support…money for debts… money!!!!!”

Now, we can hardly chastise Kevin Carter for his lack of intervention without asking some hard questions about ourselves. Who is my neighbour? and, who or what am I labouring for?

Our culture tends to push us in the direction of self-fulfilment, not simply over and above the needs of others, but often instead of.

And it sometimes seems that, without the almost surreal comparison above, we don’t even notice. Yet, consider what Paul gives as the motivation to earn a living.

“Let the thief no longer steal, but rather let him labour, doing honest work with his own hands, so that he may have something to share with anyone in need.” (Eph 4:28)

As interest rates blossom and our neighbours wither, perhaps it’s a good time to ask, “Who or what are we labouring for?”