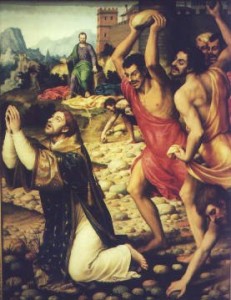 In 2 Timothy 3:12 Paul said,
“Indeed, all who desire to live a godly life in Christ Jesus will be persecuted”.
He did not say, “some” or, “might be”. He said, “all will be”, persecuted.
Now, given that most of us are not, we need to ask why.
Why did the people who claimed to know God (Israel) and later the Gentile world hate the disciples but have no problem with us?

It is not enough to say that we live in different times or that people are more tolerant. That is simply not true.
The only true answer is that the Apostles and the early church said things which got on peoples’ nerves to the point that they wanted the all Disciples of Jesus dead.

And of all the things that the Apostles said, the thing that drove the Jews mad was – strangely enough – that their was a King and Lord over Caesar. (Jhn 19:15) There was a political Kingdom being established which confronted the Jewish version of Moses and the King of the Roman Empire (Acts 6:11; 7:52; 17:7).

Jesus knew this would rock His Disciples so He warns them that the persecution was coming on account of His Kingdom. They were not to be surprised when it came but were to think back to all that Jesus had said and the victory which He had wrought through His own death, resurrection and ascension to the right hand of Majesty.

The Disciples would be comforted and kept by abiding in these words, “I have overcome the world.” (Jhn 16:33).
We have work to do. Not the least of which is to work out why our message and our way of life fails to move anyone to anything – be it repentance or wrath.

Have we compromised to the point of irrelevance? Are we in need of repentance? If so, where have we gone wrong? These are hard questions and we should be humbled by them.

One thing is certain. Abiding in Christ is going to be costly.

May God grant us the grace to see that the cost is worth it, given the inestimable price Christ has already paid on our behalf.